To Some Extent, Women 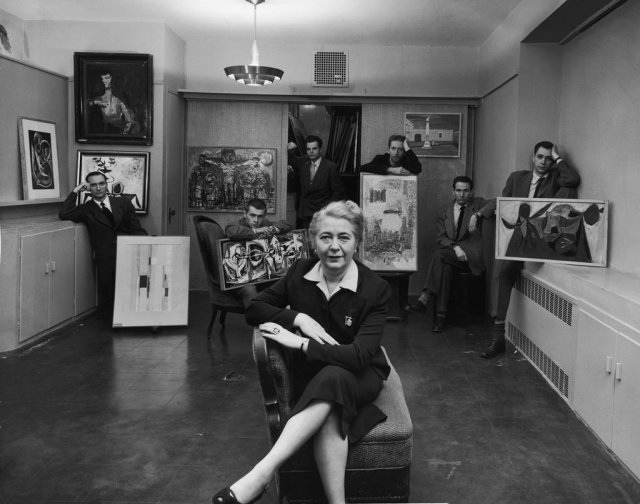 Edith Gregor Halpert, the pioneering art dealer, wearing a brooch and ring designed for her by Charles Sheeler, in a photograph for Life magazine in 1952. She is joined by artists she was promoting that year: Charles Oscar, Robert Knipschild, Jonah Kinigstein, Wallace Reiss, Carroll Cloar and Herbert Katzman. Credit…Estate of Louis Faurer; Time-Life Archive/Getty Images; via The Jewish Museum.

… Edith Gregor Halpert (1900-1970), was a formidable, feisty and sometimes manipulative self-starter with an ecumenical eye, a passion for art and an inborn instinct for sales and promotion. Halpert was central to establishing the market for between-the-wars American art and thought that everyone should own art. She liked to keep prices low, would sell on the installment plan and staged annual holiday sales. She also thought that anyone could make art, an idea that was crucial to the folk art revival of the 1930s. For her time, she was unusually open to artists of color and, to some extent, women.

Halpert’s low-balling of price, and her notion that “everyone should own art,” mark her as a visionary for her time and a relic for ours.

I live in Texas and devote much of my time to easel painting on an amateur basis. I stream a lot of music, mostly jazz, throughout the day. I like to read and memorize poetry.
View all posts by JMN →
This entry was posted in Commentary and tagged art. Bookmark the permalink.