My first encounter with Texas writer Bruce Sterling was through a column he penned in the early nineties for one of the Houston newspapers. It proffered the notion that our very nature is to seek drugging; that if there existed a legal, performance-enhancing substance with no negative side-effects (a hypothetical), it would be unnatural for a person not to use it in order to gain the advantages it conveyed. It hit me as an impudent, bad-boy
bugle-toot from the contrarian fringes of our perpetual “war on drugs,” and hard to disagree with in a certain light.

Sterling’s column opened the door for me to the impudent, bad-boy fiction of the so-called cyberpunk novelists: Sterling himself, as well as William Gibson, Rudy Rucker, Vernor Vinge, and Roger Zelazny. (This isn’t an exhaustive list.) I was hooked when a character in one of the books hands a broken device to his companion and says, “Unfuck this.”

I consumed their stories avidly. They limned a near-future dystopia in which basic institutions have cracked up for one reason or another. The hulks and remnants of a collapsed society are scavenged by mavericks with assorted nerdy knacks who dodge, juke, and improvise to eke out a living in the urban badlands. Their existence is contingent on unfucking the world they inherited.

I was working in the computer industry at the time. I lived in a sprawling urban jungle which I could easily imagine disintegrating around me. The view of ruination through my cyberpunk-tinted lenses — the wreckage left by feral commerce, the general
comeuppance of predatory civilization — was oddly exhilarating. 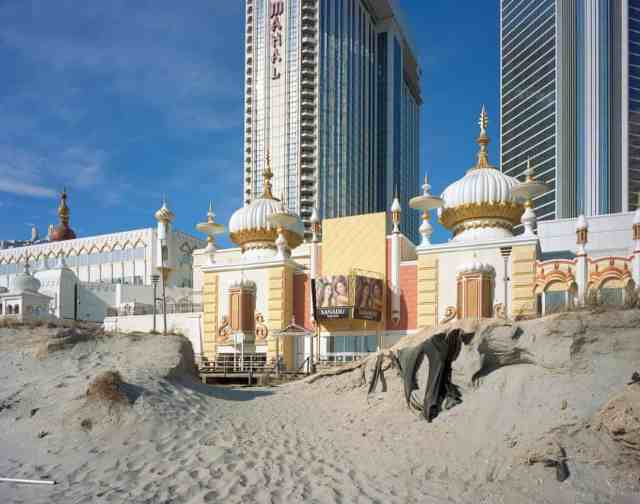 I made a run at my own rendition of a post-catastrophe fantasia. My protagonist, descended from a programming family, had inherited much code savvy; he knew the ancient languages — Object Pascal, C++, Java. The quaint parking garage he lived in was a vestige of pre-Outbreak times when “cars” thronged the now-weedy streets of the Medical Center. He hunkered in the fortress-like structure along with a spunky cohort of eccentrics. It greatly resembled where I parked my car every morning in the “industrial park” that housed our offices.

Seeing the photos in the article cited here stirred my memories of the cyberpunks. Like scrappy flies those writers lit imaginatively on the pus and scabbiness of the world’s self-inflicted wounds and extracted engrossing stories from the vision. The images of
creeped-out decadence in Atlantic City are similarly pathetic and moving. The spectacle of the elements — aka Mother Nature — reclaiming turf from relics of tawdry rapacity and deluded self-aggrandizement is comforting in its way. The catastrophile in me dwells on it like a motorist rubbernecks a collision, craning for survivors.

(Photos are from Thomas Hobbs, “Atlantic City: ‘Trump turned this place into a ghost town’,” The Guardian, 4-8-19)

I live in Texas and devote much of my time to easel painting on an amateur basis. I stream a lot of music, mostly jazz, throughout the day. I like to read and memorize poetry.
View all posts by JMN →
This entry was posted in Commentary and tagged Atlantic City, Bruce Sterling, C++, computers, cyberpunk fiction, dystopia, Houston, Java, Object Pascal, programming, Roger Zelazny, Rudy Rucker, The Guardian, Vernor Vinge, war on drugs, William Gibson. Bookmark the permalink.