Smith at the Crease 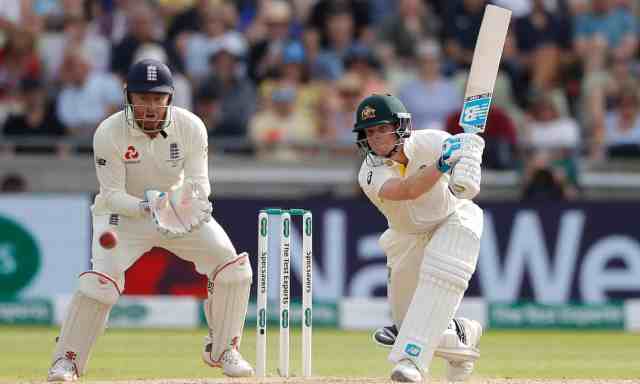 While [Steve Smith] is still at the crease nothing can be guaranteed… England made some solid progress: a first-innings lead of 90 and three early scalps… But… [by] the close Australia were 124 for three from 31 overs and with Smith still at the crease….

… Smith has already mangled a few minds. Upon his arrival at the crease England reverted to funkiness… For the seamers there might be two men on the leg side one moment, five the next, maybe with a cunning leg slip and short mid-on….

Smith was in clover as England forgot… that even the great batsmen… do not like being tied down and compelled to work for their runs….

… Why offer Smith so many easy options to jog off strike?… Hide your eyes if necessary and try a length just outside off stump along with the occasional bouncer.

So Smith was there unbeaten on 46 at the close and Australia’s lead was 34… Cameron Bancroft was caught at bat and pad by Jos Buttler at short-leg.

Burns finally square-drove a boundary… Out came Moeen… He kicked four leg-byes and defended three deliveries… [then] shouldered arms and lost his off stump.

Next, Bairstow wafted against Peter Siddle to be caught at slip… Often Broad swishes in these circumstances but he buckled down… nudging singles and occasionally slog-sweeping….

The packed Hollies Stand applauded jubilantly at the addition of every run in between chanting “He’s got sandpaper in his pants” to Bancroft….

Eventually Broad was caught at long-leg off a short delivery from Cummins….

The challenge ahead was clear: England were going to have to win this match without the assistance of [Jimmy Anderson] their champion bowler, a circumstance that is bound to be repeated at Lord’s next week.

I live in Texas and devote much of my time to easel painting on an amateur basis. I stream a lot of music, mostly jazz, throughout the day. I like to read and memorize poetry.
View all posts by JMN →
This entry was posted in Commentary and tagged cricket, humour, language. Bookmark the permalink.

3 Responses to Smith at the Crease