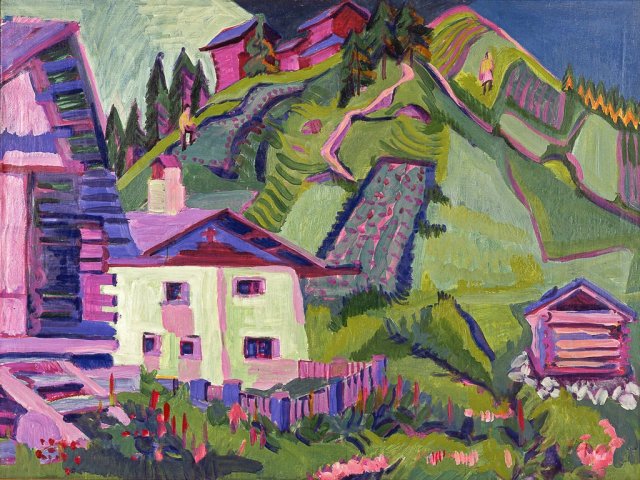 Roberta Smith describes Ernst Ludwig Kirchner as “the best and most versatile of the German Expressionists.”

Like many 20th-century German painters, Kirchner was twice broken, by World I, which resulted in his nervous breakdown, and the rise of Hitler, which ultimately drove him to suicide in 1938.
(Roberta Smith, “Modernism Reboots at the Museums — ‘Ernst Ludwig Kirchner’,” NYTimes, 9-13-19)

Smith mentions Kirchner’s “joltingly innovative color” and his “exuberantly jagged line.” These contributed to the “acidifying” of his images of modern life, she writes.

That captures some of what I admire in his “White House in Sertig Valley” (1926).

I live in Texas and devote much of my time to easel painting on an amateur basis. I stream a lot of music, mostly jazz, throughout the day. I like to read and memorize poetry.
View all posts by JMN →
This entry was posted in Commentary and tagged art, Ernst Ludwig Kirchner, painting. Bookmark the permalink.