“Storm With a Silent Mist” 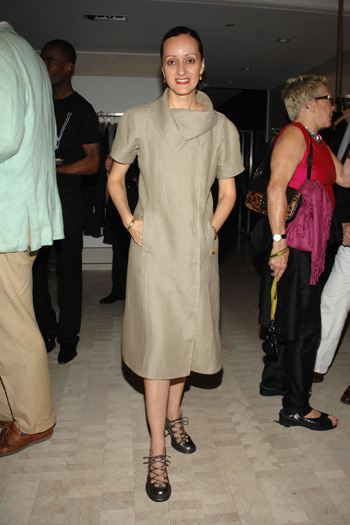 Isabel Toledo died last week of breast cancer at the age of fifty-nine. Judith Thurman pays tribute to this “designer’s designer” who described couture as a language which she had learned “as a child does, by immersion.”

Self-possession is usually an acquired patina, but Toledo’s was bred in the bone, and it often came across as reticence—the same economy of expression that she brought to her drafting table… A great dress, Toledo once said, has to surprise you with “a rush of feeling,” by which she seemed to mean the feeling of being happy with yourself. Was she happy with herself? Her business partner, husband, and soul mate, Ruben Toledo, described her as “a storm with a silent mist.”

“Izzy was a contrarian even to herself. Her true medium was unpredictability. If she sensed a cage was descending on her, she spread her wings fast and was gone.”

I live in Texas and devote much of my time to easel painting on an amateur basis. I stream a lot of music, mostly jazz, throughout the day. I like to read and memorize poetry.
View all posts by JMN →
This entry was posted in Commentary and tagged art, couture, drawing, language. Bookmark the permalink.

2 Responses to “Storm With a Silent Mist”